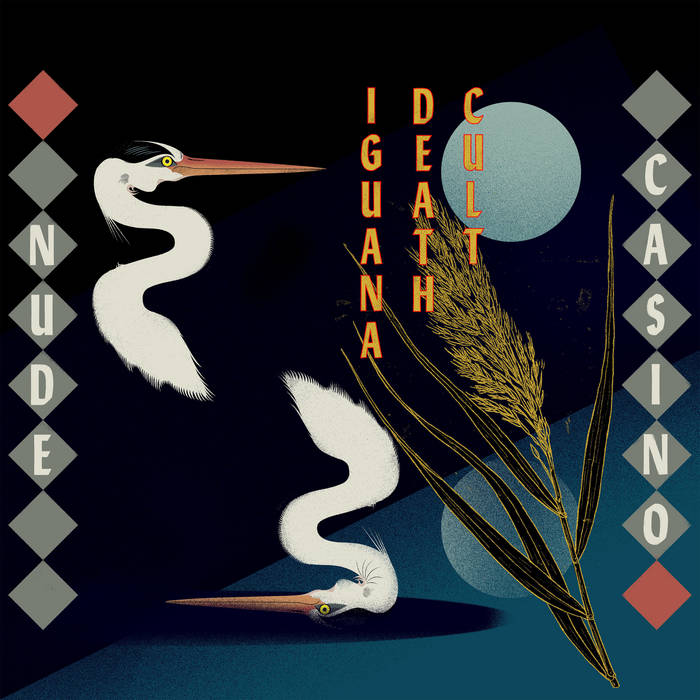 Rotterdam’s Iguana Death Cult hasn’t exactly been shy about causing havoc on whatever stage they set foot. That’s likely been the one constant since establishing their giddy brand of protopunk and garage rock on debut LP The First Stirrings Of Insect Life. Iguana’s pending follow-up Nude Casino marks a swift and sobering departure from the miasma of psychedelics they purvey so fervently. But no less intense: this band has been sharpening their tools, reemerging from their concrete cavern with a ragged and convulsive post-punk attack akin to Devo, The Gun Club, and Richard Hell.

Nude Casino sporadically evokes Iguana Death Cult’s more hedonistic tendencies, but the album’s crisper, more unvarnished sonic makeup illustrates a seething skepticism as a counterbalance. Frontman Jeroen Reek finds himself teetering in demented neurosis between vivid dream states and stark reality. The album’s beating heart is ‘Tuesday’s Lament’, an arresting five-chapter monologue that wrestles with the strains of mortality and belief. As Reek narrates the invasion of existing evils into his phantasmagorical, aquatic dream world, somehow, Iguana Death Cult manage to jam it all into a belter of a melodic hook: “Swimming upstream for the sake of paradise, it’s up there still.” A bashful resolution, albeit one that balances on the edge of fatalism.

Adding a touch of sobriety, both sonically and lyrically, hasn’t stifled Iguana Death Cult daredevil ways the slightest. The mighty triptych of ‘Nude Casino’, ‘Bright Lights’ and ‘Lorraine’ was pretty much written simultaneously, a testament to the off-the-chain chemistry the Dutch quintet has developed over the years. Axe-wielder Tobias Opschoor once again brandishes his resourcefulness for licks that penetrate the skull with charm and impertinence. He is the brains behind Nude Casino’s manic, climax-building pinnacle ‘Nature Calls’, a juggernaut of a track that ironically captures a yearning to drift away from the civilized world. Though more grounded in reality, sonically speaking, ‘Nature Calls’ might be the closest kin to the more surrealist pronouncements of First Stirrings.

Playing an abundance of shows – at small clubs, squats and festivals such as The Great Escape, Lowlands, c/o pop, Plissken and Reeperbahn – has whipped Iguana into even more ferocious live band, and that experience carries over in the recordings. The tandem of Justin Boer (bass) and Arjen van Opstal (drums) is still the engine that drives the group’s helter-skelter horsepower. Jimmy de Kok adds a new melodic dynamic, assaulting the neurons with feverish organs and synths. With yet another erratic element in the fold, Nude Casino invokes something more claustrophobic and barren, tackling themes like sleep paralysis (‘Half Frisian’) and lost innocence (‘Castle In The Sky’).

Indeed, Iguana Death Cult isn’t gleefully surfing that mighty tidal wave anymore, but giving in to destructive currents that enwrap everything in chaos. Nude Casino is an intrusive, spastic affair, streamlined into a propellant, hook-heavy yomps, never more obvious than the cadaverous disco pulse of ‘Carnal Beat Machine’. Like The Clash and Minutemen before them, Iguana Death Cult have embraced the art of rocking the fuck out with all senses and impulses up to eleven. Rapturously sinking in their claws, and never letting go.

Bandcamp Daily  your guide to the world of Bandcamp